ARE YOU BRAVE ENOUGH TO DINE AMONGST DEATH EATERS?

You are invited to a “siriusly” spooky Hallowe’en feast at the Studio Tour as Hogwarts After Dark returns for 2022.

Trick or treat yourself to a bewitching two-course dinner amongst the popular interior sets of the Studio Tour including the Potions classroom and Dumbledore’s office followed by dessert in the Forbidden Forest. The lights will be dimmed and the music more foreboding as the Studio Tour will be patrolled by Death Eaters. Are you ready to delve into the darkness of the Wizarding World?

Witness the marvellous floating pumpkins
Begin your evening with smoking dry ice cocktails and canapés before venturing into the magnificent Great Hall, decorated with over 100 hand-carved floating pumpkins, as first seen in Harry Potter and the Philosopher’s Stone. The Great Hall tables will also be festively laden with a Hallowe’en feast of red apples, pumpkins and cauldrons of lollipops.

Experience exclusive after-hours access
Explore the Studio Tour after hours and remember to keep your wands at the ready, as Death Eaters will be lurking in the shadows… Fear not, though: you will get the chance to learn wand combat moves and practice your skills in preparation for a live duel with Death Eaters.

See the lights dimmed in Diagon Alley
A refreshing Butterbeer will be provided in the Backlot Café before you step into a darker Diagon Alley, lit especially for the spooky season.

The Studio Tour’s ‘Hogwarts after Dark’ events will take place on Wednesday 5th, Thursday 6th and Friday 7th October 2022 from 6:30pm until midnight and are open to over 18s only. Guests will be seated at round tables of 10 or 12 and tickets are priced at £260pp or £130 for Carer tickets. Tickets go on general sale at 10:00am on 4th August. Terms and Conditions 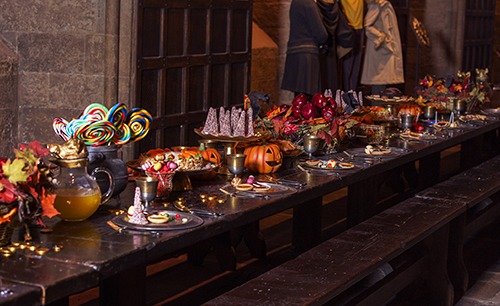 Explore the darkness of the Wizarding World as we host a special feature dedicated to the Dark Arts.
Find Out More